Demodex mites are found in the skin of nearly all adults. We are not born with them but all acquire them at some stage. There are two types, Demodex brevis and Demodex folliculorum that live in our sebaceous glands (oil glands) and in our hair follicles respectively. The main sites of colonisation are therefore the face, scalp and upper chest. The images below are scanning electron microscope images of Demodex mites in a hair follicle and on the skin surface. 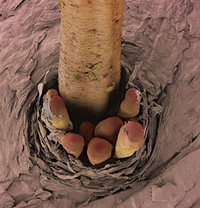 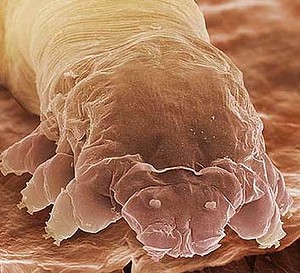 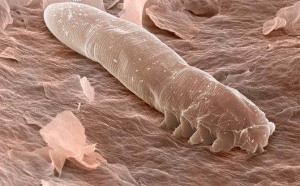 How are Demodex mites involved  in rosacea?

Since most people do not have rosacea but everyone has Demodex mites they are clearly not the only factor that determines the onset of rosacea. They are probably not involved in all cases of rosacea. However, evidence is accumulating that for some patients, Demodex mite activity is a factor in the development or worsening of rosacea.

As you will have read in the main rosacea article, rosacea is a multifactorial disease. An overactive skin immunity combined with skin barrier problems and external triggers leads to excessive and unwanted inflammation in the facial skin. Demodex mites may well be one of the external triggers that can trigger an overactive immune response in a susceptible individual.

Zhao et al have published an analysis in the Scientific Journal,  Archives of Dermatology,  which looked at 48 clinical studies of Demodex and rosacea. They concluded that there was a significant association between Demodex and rosacea. In most investigations rosacea patients had many more Demodex mites in their skin than control patients without rosacea. This however is not proof of causality.

Theories as to why Demodex mites trigger rosacea include:-

If any of these theories are correct it quickly becomes clear why it is hard to prove a link. The immune response to Demodex will vary depending on the type of immune system a person has and may also depend on the bacteria within the Demodex. Therefore in some patients the actual number of Demodex mites may be less important. In very sensitive patients a small number of mites could trigger an immune response which leads to rosacea.

Further research will be needed to prove that Demodex has a role in triggering or worsening rosacea.

The Demodex mites emerge from hair follicles at night to eat dead skin cells. Fine scaling around hair follicles can be seen in some patients and this is clinically called pityriasis folliculorum.

There are not currently any licensed treatments for Demodex mites in rosacea. Any medicines used are being used off license. This means that the medicine has been approved for use in one condition and is safe but has not received a license to be used in other conditions. Many medicines are used in this way in Dermatology due to the large number of rare diseases.

Fabien Forton has published a fascinating review article discussing the link between rosacea and Demodex mites and also suggests various treatment strategies (JEADV 2012, 26, 19-28). It should be noted that effective treatment with creams takes time as the Demodex mites live deep in the oil glands and hair follicle and are only killed when they move near to the surface. Six months is often needed to reduce Demodex levels and after that maintenance treatment is needed.

If you are interested in trying any of these treatments you will need to visit a Dermatologist, preferably one with an interest in rosacea.

1% Ivermectin cream is the first treatment to be formally approved for the treatment of rosacea. The FDA, the US government medicines approval agency, has granted a license in the US and European approval will most likely follow soon. One clinical trial showed this new cream to be better than metronidazole gel in the treatment of rosacea. Although the precise mechanism of action of this cream is unknown, ivermectin is widely used in animals to treat mites and it seems likely that the positive effect is due to a reduction in demodex mites. It is likely that this treatment will not work for all patients. Rosacea has many triggers and not all patients will have demodex mites as a rosacea trigger.

3.  Crotamiton. This is the main ingredient of Eurax cream.

4. Benzyl benzoate cream ( not available in the UK)

Soolantra (1% ivermectin) -treatment of demodex mites in rosacea for Rosacea

After 3 months of treatment my rosacea spots have gone. Very impressive treatment. Will have to wait and see how long it lasts . I have been told that I can repeat the treatment if needed

Read more reviews Submit your own review. Submit a review

Search for your nearest clinic